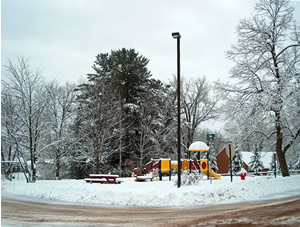 The City of Spooner currently maintains nine developed parks. Some provide playground equipment and picnic tables. Others are just for picnicking and relaxation, while still others provide for varied multiple activities such as baseball, softball, football, basketball, hockey, broomball, skating and hiking/cross country skiing.

Larger groups wishing to reserve a portion of any of these parks for a specific day must call City Hall at 715-635-8769 to reserve that site and that date. Reservations of park sites are on a first come first serve basis.

College Street Park
Approximately 20 acres, College Street Park is located in the northwestern part of the city. It features three major league/little league baseball fields, an unpaved outdoor hockey rink, a free skating rink and a basketball court. The warming house has a changing area and toilet facilities.  Included in the picnic area are a shelter with electrical outlets and a drinking fountain, picnic tables and benches and newly installed playground equipment. Also available is a 1.2 mile hiking/cross country ski trail with loops for beginners and intermediate skiers. A portion of the ski trail is lighted for night skiing; snow conditions permitting.  In 2010, a 1.4 mile paved trail linking the middle school with the high school and elementary school via the park was created. The trail connects with the hiking/skiing trails.  Benches were installed along the trail.  Frisbee Golf and exercise stations were added in 2011.

Centennial Park
Centennial Park is located at the intersection of Highway 63 (River Street) and Walnut Street. The park features public rest rooms, open spring through fall; picnic tables and benches are available for picnicking and relaxation. The Spooner Garden Club under the city’s Adopt a Park Program maintains Centennial Park.

Blooming Vale Park
This city park is located at the old airport site north of County Highway A on Blooming Vale Road, outside the city limits. It contains two adult softball fields, bleachers and picnic tables for spectator use. Adjacent to the park, the Indianhead Rifle & Pistol Club operates a shooting range on 40 acres of city land.

Lioness Park
Located between Bashaw, Dale and Vale Streets, Lioness Park lies in the center of the city. It contains new small children’s playground equipment and picnic tables. The Lions Club developed the park. The Spooner Memorial Library, one block to the east of the park, has public rest room facilities available. 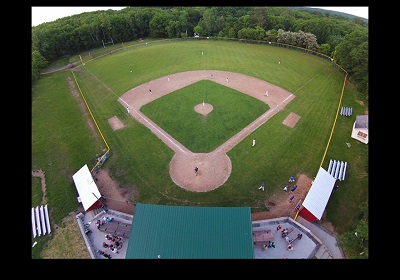 Home of the Spooner Cardinals baseball team.  This field is a men’s league baseball field located in the northwestern portion of the city at the intersection of First St. and Michigan St.  It is also used by the Spooner Rails Junior Varsity baseball team.  Electrical outlets and two sets of bleachers are available at the site.

Triangle Park
Triangle Park is located at the intersections of Summit Street and County Highway K (Scribner Street). Containing picnic tables, a drinking fountain, a bridge and various plants, the park is maintained by the Spooner Garden Club.

Eastland Addition Park
Spooner’s newest park is located at the intersection of Northland Drive and Badger Street in the eastern portion of the city. This five-acre site features picnic tables and newly installed playground equipment. The construction of a skateboard park at this site was completed in 2003.

Located on Hwy 63 south of the intersection of Hwy 70.  It is a memorial to veterans.  There is a picnic area, benches and a fishing pier.

The city also holds two other locations that have been classified as parks but remain undeveloped. One is in the Durand Addition at the end of Em Street and the other is in the Pines Addition east of Highway 63 near the intersection of Durabilt and Pine Drives. 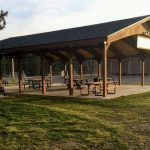 Approximately 13 acres, the Railroad Park is located across the tracks from the Railroad Memories Museum, adjacent to the Wild Rivers Trail and the WI Great Northern Railroad excursion line.  While the City of Spooner owns the rare roundhouse (451 Roundhouse Road), it is the City of Spooner’s Railroad Park Board (RPB), created in 2009, that was given the responsibility to develop the the roundhouse and surrounding area into a safe, welcoming, historically significant railroad themed park.  The Friends of the Railroad Park (FORRP) is the nonprofit 501c3 and the fundraising arm of this project, and has been operating in the community since early 2017 (orginally was formed under the Spooner Development Corporation’s umbrella; however, newly incorporated on its own).  The RPB along with FORRP has concrete plans to eventually turn the Roundhouse into a Community Center with hopeful usage including: the Spooner Senior Center, art gallery, farmer’s market, the Chamber of Commerce, music events, weddings, and both small and large functions of all kinds.  Excitingly, the roundhouse can comfortably seat 1,500 seated guests.

The purpose of the Friends of the Railroad Park Inc.’s focus is to showcase Spooner, WI’s 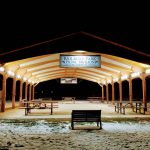 rich railroad history by preserving the City of Spooner’s rare, historic roundhouse and turntable, develop the surrounding unused, blighted brownfield, downtown Spooner property into a railroad-themed park, and offer year-round educational, culturally rich gathering place for residents and visitors.  The Park will be the hub of the city, providing a pavilion, walking/biking trails with signs describing the ancient sites crucial to train operation, areas for music and festivals, picnic tables, playground equipment, parking lot, and other amenities.